Anyone for tennis (or tricycles?)
We’ve played tennis on a lot of different courts over the years, ranging from public courts in local parks through to private members clubs (some of which have lived up to tennis’ rather snooty image).

Playing tennis in Southwold, Suffolk, though gave us a new experience.

We used the public courts that are set in an idyllic spot tucked away on Southwold Common. They are surrounded by the golf course and are located in what seems like a huge crater (or golf bunker), caved out of the sandy terrain.

Usually public courts are guarded or locked to keep children and those up to no good out.

Things are different at the   Pit Stop cafe.  As soon as you arrive you see kids tricycles and bikes all around. If no one is playing on the courts they are used as a kind of cycling track or play area.

Young children are all around, while parents look on drinking their tea or munching their sandwich perched at the café.

Of course, if you want to play tennis the area is cleared of children (and bikes) before you get on court: the owners insist on this, for health and safety reasons. 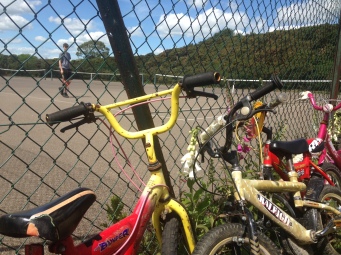 Tennis purists may be uncomfortable with this seemingly carefree arrangement. Tricycles on courts are not exactly the image most clubs project.

Then again, we found it quite refreshing.

Playing on these courts is cheap. £2 an hour for adults and £1.50 for kids. And the courts themselves played well. The bounce was true and the courts had new nets and net bands.

Southwold probably can’t afford to upkeep public courts solely for those that want to ‘pay and play’. Finding new uses – such as a kids biking area and café keeps those courts alive and introduces tennis to children at a very early age.